Link to this page

Maesta
Order a Hand-Painted Reproduction of this Painting 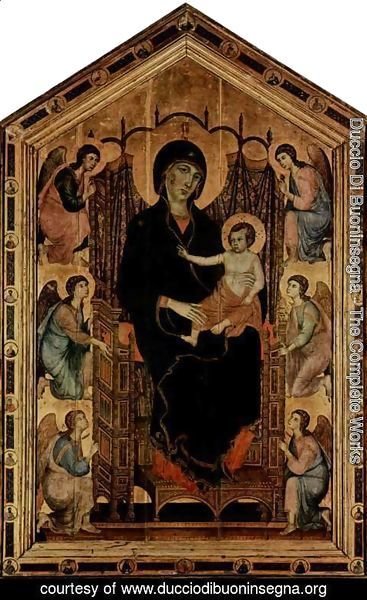 The first documentary evidence of the life of the great Sienese painter date back to 1278. This is a payment record for 40 coins for the painting of 12 trunks meant for the custody of documents held at the Office of the Biccherna in the Siena Council, of which unfortunately no trace remains.

The presence of Duccio on a payment record, a task more suited to a craftsman than a well-known artist, would seem to indicate that he was still young at the time. In actual fact, the substantiated kinship with a certain Bonaventura (his brother), father to a painter Segna, fixes the date of Duccio's birth between 1255 and 1260. Born from a Buoninsegna who lived in the hamlet of San Donato, Duccio gives further news of himself through two other payment records: in 1279, for a cover of a register of the Biccherna; in 1280, for a heavy fine of 100 lire, imposed on him for an offence of which we don't know the reason. A few years later he receives his first important commission: on the 15th of April, the Company of the Laudesi of Santa Maria Novella in Florence entrusts him with the task of painting a large panel. In the month of October of the same year, the painter is back in Siena and is working for 8 soldi on another Biccherna register cover. 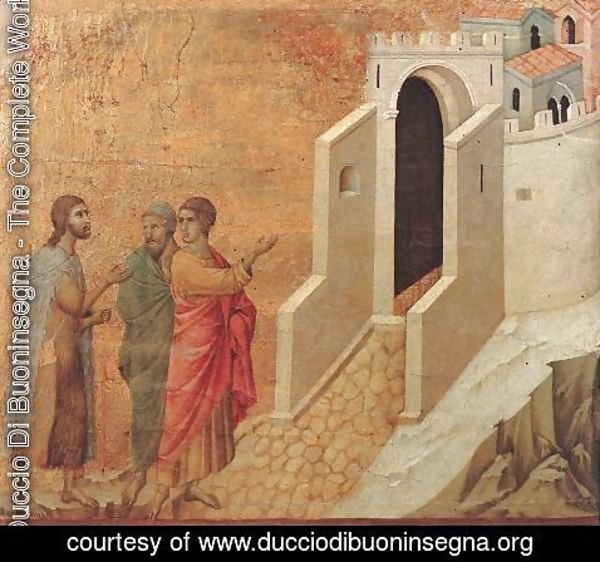 He is commissioned the same job and paid for the years 1286 - 91 - 92 - 94 - 95, when Duccio is already an established artist. The news actually dates back to 1295, of his presence at the location where the new Fonte Nuova d'Ovile was to be situated. In this instance he performs the role of Art Master and advisor, together with Giovanni Pisano and other artists of considerable fame. His own fame as a painter goes hand in hand with his reputation as a boisterous citizen, engaged in witchcraft practices, that also results in him being fined in 1302.

On the 4th of December of the same year he receives 48 lire from the Council for the panel with predella for the alter of the inner chapel of the Palazzo Pubblico. This richly paid commission is followed by a conspicuous number of fines. A sign of the artist's rebellious nature, these pecuniary penalties refer to unpaid debts. In 1295, the artist is sentenced for having refused to swear his allegiance to the Captain of the People.

In 1302, a fine is levied against him for having deserted a war in Maremma. Despite his debts and all the fines he has to pay, in 1304 Duccio appears to be the owner of a vineyard in the Castagneto area, near Siena, an indication of considerable wealth. This economic condition is further improved after the 9th of October 1308, when he is commissioned the Maesta. Finished in 1311, created for the Duomo of Siena, the work is carried into the cathedral on the 9th of June with a solemn ceremony. 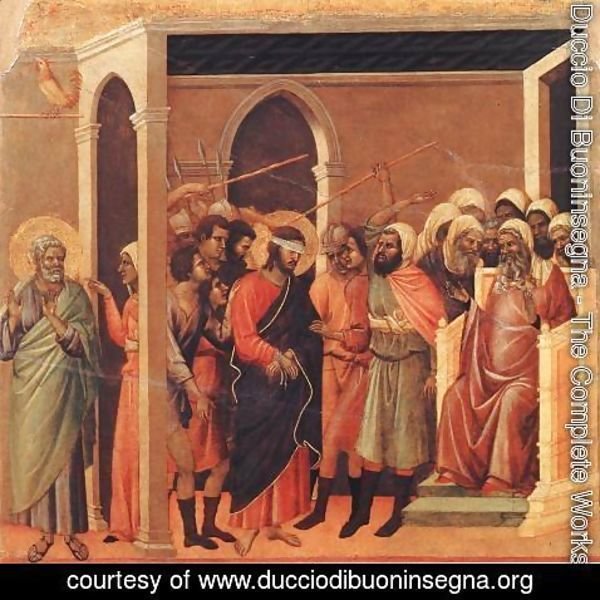 According to the account of the chronicler Agnolo di Tura, at this time the predella and the crowning are still to be completed. The illustrious commission pays Duccio the considerable sum of 3000 gold florins; yet on the 8th of June 1313 he still appears to be weighed under his many debts. Up until 1318, the painter lives in San Quirico, near Porta Stalloreggi, where he has his studio; in all likelihood he dies at the end of this year, or during the first six months of the one following. A document signed by his sons, in which they relinquish the right to their paternal inheritance, would seem to indicate that he was still living in 1319.

At his death, Duccio left his wife Taviana and seven children, of which at least two were later to become painters.. (From Rai International online)

Report an error on this page